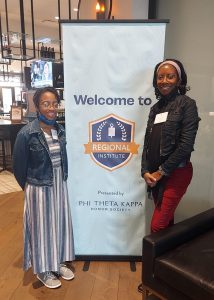 Several months ago, the Phi Theta Kappa Honor Society’s Alpha Nu Tau Chapter at Wilson Community College was awarded four honors during a virtual convention. But one of our greatest accomplishments during that convention was having one of our very own students appointed to a regional officer position, which is a first for WCC.

Naomi King, who joined PTK in August 2020 and is a Wilson Early College Academy student, accepted the position of vice president of public relations for the North and South Carolina PTK region.

Wilson Community College’s Phi Theta Kappa Honor Society recognizes high-achieving students with a 3.5 or higher grade-point average, have completed at least 15 credit hours and have an endorsement by faculty and staff.

As an officer, Naomi was afforded the opportunity to visit the PTK National Headquarters in Jackson, Mississippi, and attend the national convention from Nov. 4-7. Angela Grantham, one of the college’s PTK advisers and math instructors, went with Naomi. They joined other regional and international officers to meet and talk with the president and CEO of the Phi Theta Kappa Honor Society, Dr. Lynn Tincher-Ladner. They also participated in various educational forums and toured the PTK headquarters.

They visited the Mississippi Civil Rights Museum, where Naomi met Hezekiah Watkins, a Freedom Rider from the 1960s. She also met with James Meredith, the first African American student to attend Ole Miss.

Rob Keel, who spoke on education and gender, and Dr. Rachel Allison’s lessons on women’s sports were also very informative and led to meaningful conversations.

“When I joined PTK in August of 2020, everything was virtual, but you could still sense the drive and hope through the computer screen,” Naomi said. “Going to Mississippi was my first in-person PTK event, and it was amazing to actually be there. Everyone treated each other like family, even though we didn’t know each other. Connecting with PTK members from all over the country was a wonderful experience that I have worked hard for.” 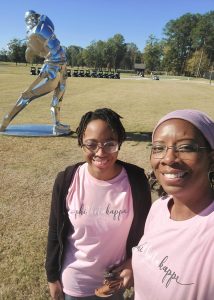 PTK provides opportunities for members through programs like Honors in Action and Five-Star Competitive Edge to develop problem-solving, team-building and effective communication skills. Students at WCC participate in service projects like volunteering at the Community Soup Kitchen, collecting general supplies for the Longleaf Neuro-Medical Center, playing bingo at nursing homes, giving canned goods to veterans and donating books to local organizations, just to name a few.

“This is what it’s all about — giving students opportunities of a lifetime,” Grantham said. “Naomi stepped out of her comfort zone to run for VP of public affairs, and because of holding this regional officer position, she was able to visit headquarters. I am so grateful to be a part of this experience as her adviser. Both of us have learned so much.”

Naomi is also a Student Government Association member, and she serves on the Teen Court Committee of Wilson. After graduation from WECA in May 2022, she plans to attend a four-year university to pursue a degree in nursing.

She has received many accolades from advisers and other PTK members from all over the region.  And we are so incredibly proud of her.  We hope Naomi’s leadership will inspire others to take advantage of all the great opportunities PTK and WCC has to offer.

For more information about PTK, visit our website at www.wilsoncc.edu, or give us a call at 252-291-1195. At #WilsonCC, we make Wilson work.

• Dec. 14 — Ribbon-cutting for the A. Dwight Johnson Learning Resource Center.