Home > About Us > History of Wilson Community College 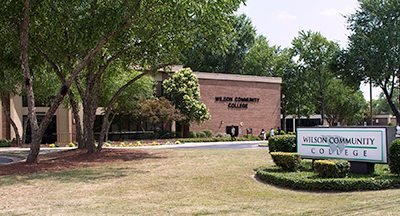 Wilson Community College (WCC) is a member of the North Carolina Community College System. Established in 1958 as Wilson Industrial Education Center, it is one of the system’s oldest institutions. From its inception, it has offered quality education to those who have enrolled in its programs. The first classes began September 29, 1958 in the Charles L. Coon High School Annex. Construction began on the first building on the current site in 1958. In 1964, the State Board of Education granted authority to award the Associate in Applied Science Degree and the school name was changed to Wilson County Technical Institute.

As enrollment increased, alterations were made and an automotive shop and a welding classroom-laboratory building were completed. In 1969, both enrollment and staff increased as the Institute responded to the demand for technical education. During the same year, the Institute was accredited by the Southern Association of Colleges and Schools. Grants totaling $1 million were received and Buildings J and D were occupied in 1970. In 1971, following the death of the Institute’s first president, Salvatore DelMastro, Dr. Ernest B. Parry was appointed president. He served until his retirement in July 1982 when Dr. Frank L. Eagles was appointed president. Dr. Eagles retired in September 2003, and Dr. Rusty Stephens became the fourth president of the College. In 2015, Dr. Tim Wright was named the fifth president of WCC.

From 1971 to the present, Wilson Community College has received federal and state grants enabling it to provide additional services such as a program for student counseling and tutoring, as well as classroom training in Adult Basic Education.

Between 1977 and 1989, many of the buildings on campus today were completed to provide more space for the growing and additional programs, a student lounge, a bookstore, and more. In 1997, the Salvatore DelMastro auditorium was completed, allowing the old auditorium to be converted to additional library facilities. The Frank L. Eagles Community Business Center addition to Building G was completed in 2003, adding much needed meeting rooms and classrooms to the College facilities.

The name was officially changed to Wilson Technical Community College in 1989. In 1993, the Department of Community Colleges granted the College the authority to award the Associate in Arts degree. The courses required for this degree parallel the first two years of those offered by four-year colleges and universities. In 1997, the College converted from the quarter system to the semester system. This change was made in the entire North Carolina Community College System to enhance the transferability of students to four-year institutions.

Since 1997, the College has experienced extraordinary student growth and continues to serve as a major source of education and training for the workforce in Wilson County. In 2007, the official name of the College was changed to Wilson Community College. In 2008, the College celebrated its 50th year of serving the Wilson community, and opened a new student center. This new building has set the pace for a new direction for the College as it strives to be a leader in the use of updated technologies and sustainable programs.